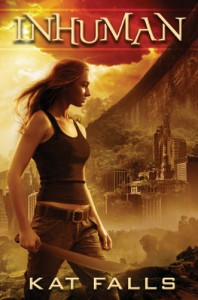 I received a free copy of this book from Netgalley on behalf of Scholastic books in exchange for a fair review.

In the distant future, America is split at the Mississippi River. A virus has ravaged the East and a giant wall has been built to keep the rest of a country safe. This virus was created by a company called the Titan Corporation. They built amusement parks and wanted to create freaky animal hybrid creatures for their parks. Well they screwed up big time and millions of people became sick.

Delaney “Lane” Park McEvoy is a pretty normal teenage girl, living on the Western side of the wall. She has a few friends and a soft spot for stray animals. She spends her free time in self-defense classes that her father makes her take. She thinks her father is a successful art dealer that just happens to travel a lot.

Her father, Mac, is a fetch; which is a person that crosses the wall into the east to retrieve things people have left behind. This is a highly illegal profession, punishable by public execution. And he’s just been busted.

The director of the agency that busted Mac has a proposition for Lane. Get her father to do a special fetch to Chicago for her and she’ll erase his file. The problem is Mac crossed the wall, so Lane has to venture into the East to find him and she’s never even seen the other side of the wall before.

The director gives Lane very simple instructions. Get to the island military base where there is a doctor that may know where Mack is and get back. If she can’t find her father, get back ASAP before they block the secret passage. Oh and don’t get infected.

Lane sets off into the East, pretty much unprepared. She does however remember the fairytales her father used to tell her as a child. They seem shockingly familiar to the sites and creatures she sees in the East. She realizes her father may have been secretly training her to become a fetch.

Once in the military base she meets Everson (the good guy), a guard that actually seems to care about the people remaining in the East and Rafe (the bad guy), an outcast that steals and kills to survive and who knows her father. Both extremely attractive (of course), both want Lane.

Lane soon learns that the East is not entirely like how she was told. Lots of uninfected people were left behind when the East was evacuated and the wall was built but the government doesn’t seem to care about them. The ones that were infected have turned into animal-people hybrids.

Depending on the stage of the infection, some still have their human side and they are called “manimals”. Some have gone fully animals and they are considered feral. And sometimes ferals have no problem hunting humans.

So this book had its flaws (some big ones) but I kinda liked it. I liked Lane; her determination, and her heart of gold (even though it gets her in trouble).

Rafe and Everson were total clichés and the love triangle was really (REALLY) in your face. Like BAM. LOVE TRIANGLE. No subtleties about it. If there had been no love triangle, this easily would’ve been a 4 star book. There were also some tiny holes in the plot.

But I really liked the new spin on a dystopian world. A virus that creates animal/human creatures instead of zombies (or some other variation of the undead). It was something new and different and I did enjoy it. The action kept me going in this book. I flew through this so fast! There aren’t many slow moments.

Overall, this book was okay. The love triangle was annoying enough to make me dislike the book but the creativity and the action kinda made up for it. I’m interested enough to keep an eye out for the sequel.